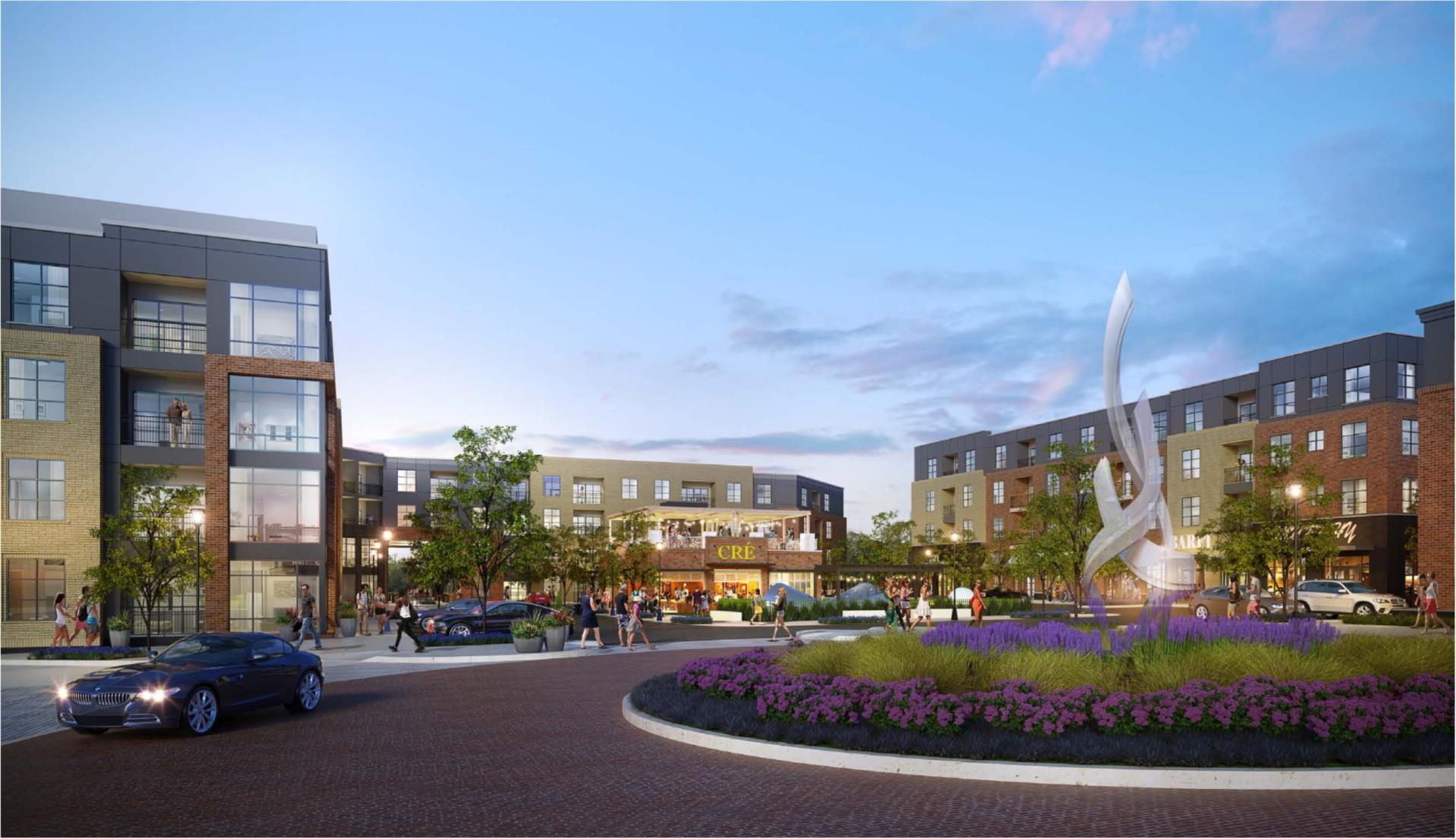 The applicant, Trinsic Development Services, is asking the city to change the zoning of a 16.2 acre site from residential to office and institutional use with a mix of apartments, townhouses and a small amount of space. commercial.

Chapel Hill Mayor Pam Hemminger said the special council session on Monday evening was called so council members could make recommendations and get more information on the project before embarking on formal public hearings next week.

The city began discussing the Aura development project off Estes Road in May 2020, where several council members expressed concern over additional traffic resulting from the increase in housing numbers.

The site proposal includes around 419 apartments and townhouses and 650 parking spaces in total – with 360 spaces confined to a parking platform at the center of the project. The Aura project also includes approximately 15,000 square feet of commercial space.

Overview of the proposed Aura project. (Photo via City of Chapel Hill.)

However, the two signals at Franklin Street and MLK and at the intersection of Somerset and Estes Drive are still cause for much concern.

During Monday’s meeting, Craig Scheffler of infrastructure solutions company HNTB shared a few models projecting what traffic would look like, potential delays, and how Aura would affect the surrounding community.

Scheffler said the models reflect driver behavior as well as assessing the impact of bus stops and future traffic control measures, such as adding roundabouts or stop signs and widening of roads. Before examining how Aura would affect traffic on the already busy road, Scheffler presented several models that detailed how current and planned developments will affect surrounding streets during a typical weekday over the next several years.

To do this, the models assign each street a service level score between AF. Each service level is used to analyze traffic on roads and intersections based on performance metrics such as vehicle speed, density and congestion.

“Les Estes and MLK are dropping to a service level E,” Scheffler said. “Based on the results of our model in the afternoon, I’m not at all surprised by this driving several times in this area in the afternoon. Estes and Somerset are not very pretty, and that’s no surprise. When you add another approach and don’t improve the intersection at all, the PM [traffic peak] obtains a service level F.

As of April, 27 new Chapel Hill development projects were under consideration by city staff or council, and four more were in the conceptual planning phase.

With all the new developments, Scheffler said the models predict Estes Drive and Franklin Street will be heavily impacted in 2024, with its service level rating degrading from C and D to D and F in the projected model.

Showing how the proposed Aura development affected his models, Scheffler noted that the city’s proposed traffic developments have not significantly improved the level of service on the roads.

“Basically Estes Drive – these upgrades – provide a sort of band-aid,” Scheffler said. “They improve it a little bit, but are offset by the amount of traffic distributed by all of these background developments or the overall traffic growth. “

If a southbound right-turn lane is added on West Franklin Street, the models predict only small benefits to the overall traffic flow. If a roundabout and traffic light were added on Somerset Drive as another potential solution, Scheffler said there would be a moderate improvement at best.

“So if we try to translate that to ‘what does that mean to somebody’ – so if you go west on Estes and get close to MLK, and wait for a traffic light or that you miss the fire, how much of a delay, right? Parker said.

Council member Hongbin Gu said the models presented by Scheffler do not give a complete picture of how traffic would be affected by Aura. She asked for more data and analysis – regarding how long and how often cars are queued up to each intersection – to be provided at the next public hearing.

The council is due to hold a public hearing on the proposed development on May 12 and a second on May 26.

Editor’s Note: An earlier version of the title of this article indicated that the analysis of the Aura development project had led to “increased” congestion. The models presented on Monday evening do not reflect that the project would worsen traffic conditions, but would largely maintain the levels projected by 2024.

Main photo via the town of Chapel Hill.

Chapelboro.com does not charge subscription fees. You can support local journalism and our mission to serve the community. Contribute today – every dollar counts.

How To Use Website Traffic Analysis For Personality Development

VMware: How to Perform Network Traffic Analysis Without TAP